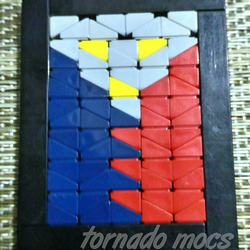 Star Wars is an ever expanding franchise as Disney and LucasFilms set to release “The Force Awakens” fans are thrilled that 2015 is the year everyone will return to the a Galaxy from Far Away. If the teaser trailer from last April has not excited you some passionate fans are hard at work in keeping the fandom alive.

For LEGO® fans their imaginations comes alive when you talk about “Star Wars”, and one of them is getting reacquainted with George Lucas’ sci-fi fantasy adventure.

I got interested and inspired about creating his version of Darth Vader’s Lightsaber, since I was inspired during ToyCon 2015 that people enjoyed playing with his MOC version of Thor’s hammer the Mjolnir, which was made entirely of red LEGO® bricks that was part of the exhibit from the three-day convention last June here in the Philippines.

There has been variation of Darth Vader’s Lightsaber, but what’s new to my version is that this one has the red blade. Most of the MOC version presented by other fans is only the Lightsaber handle or a hilt minus the blade, while this one is fired up to appear its ready to slice up a few troopers of the Rebel Alliance.

I had built this for three days on a trial or error that made this lightsaber sturdy enough to have the weight of the blade included in the design. I was also inspired to build this since LEGO® has no official lightsaber set ever released and since this is year of the Star Wars why not make this an interesting LEGO® Ideas submission.

Darth Vader’s lightsaber is consist of two parts the handle which have 213 pieces and the blade that’s made of 138 LEGO® bricks for a total of 351 pieces. The handle alone has intricate details based from Darth Vader’s Lightsaber design that I has put together for three days.