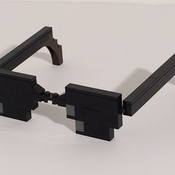 For those of you that don't know, the Snake Train was originally going to be a real LEGO set. It was going to be released along side The Ultra Sonic Raider, Epic Dragon Battle, and so on. For whatever reason, the LEGO group decided to cancel its release. Images of the product can still be seen because it was displayed at some toy fairs before the cancelation. When I realized that this product actually existed and was cancelled, I was disappointed. It could even be seen in the TV show in the episode, Rise of the Great Devourer. In the episode, it wasn't a train, it was a chain bus. I feel like this set needed to be made, so I made my own simplified version of the vehicle seen in the TV show. Hope you like it.

Minifigures include: Four snakes, one from each tribe.