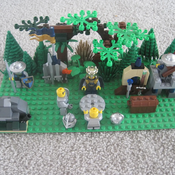 Ever wonder where pirates live when they aren’t sailing the high seas? In a pirate village.

This pirate harbor has four houses, a tavern, a secret pirate hideout, two lookouts, a dock with storage warehouse, and a small sailboat and a canoe. Three of the houses have removable roofs. And the tavern can come completely off of the mountain.

The bottom floor of the tavern has a bar and a kitchen/living area for the tavern owner. The top floor has three bedrooms for guests.  Each bedroom has a bed, a table, and a candle.

The mountain can swing open to reveal the hideout inside. A secret sliding door is the entrance to the cave. The hideout has the pirate captain’s headquarters, the captain’s private bedroom, a jail, a guard room, and a treasure room. There is another sliding door to access a cannon on the side of the mountain.

The minifigures might include (from left to right) a pirate captain, a lady pirate, a sharpshooter pirate, a knife thrower pirate, a regular pirate, the tavern owner, a musketeer, a knight, a conquistador, a British soldier, and a native.

Feedback is appreciated. I want to make this a better set so hopefully it will reach 10,000 supporters. Right now the inside of the hideout is a bit empty, so suggestions for that are appreciated.

I think this should become a set because

This can only become a set with your support, so please support this project and tell your friends. Please check out my other projects too. I’m hoping at least one of them will reach 10,000.