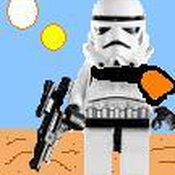 This is a Japanese Doujou that I designed using Lego Digtial Designer. Doujou are places where martial arts such as the sword fighting art of Kendo, Ninjutsu, Karate, Aikidou etc. are practiced in. A great piece of ancient Japanese architecture that would fit in well with any Ninja themed set based in the time of feudal Japan.

some features it would include are the following:

-Printed rice paper and wood panes on most of the white panels that make up the walls, obviously the pannels are just plain white because i can't design a rice paper doors pic for them on LDD.

-Sliding doors for both the front and back entrances.

-A small meditation area containing a red statue which Samurai armor can be place on and a table in front of the statue that a katana sword can be placed.

-a small bell shrine near the back of the set.

-I didn't include them because lego has removed all specially printed parts from LDD but would include 2 red ninja, 2 black ninja, and a Samurai minifigure.

Also, the model would contain many roof elements in the rare sand blue color of the LEGO color spectrum, as well as many reddish brown pieces, and a rare 48 x 48 green baseplate.

Whether or not you love Japan or ninja sets or both like me, I think you would surely like to add this amazing set containing over 1400 pieces to your collection.