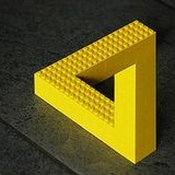 On July 14, 2015, the New Horizons space probe flew past Pluto at a speed of 50000 km per hour after a 9.5 year voyage, revealing the landscape of Pluto and its satellites for the first time. This Lego set commemorates this historic event by faithfully reproducing the New Horizons probe.
Pluto is the largest object in the Kuiper belt, one of 100,000 icy bodies that orbit beyond Neptune. Before New Horizons, Kuiper belt objects were thought to be cold and dead, but the data from New Horizons show a surprisingly  dynamic and changing landscape of nitrogen, carbon monoxide and water ices. Whether a planet, dwarf planet, or just a member of the Kuiper belt, Pluto is a fascinating, puzzling and active world.
The New Horizons space probe model includes all of the instruments used to study Pluto:
LORRI, the camera which imaged the surfaces of Pluto and its satellites,
Ralph, the spectrometer which provided the colors of the Pluto images and data on the composition of Pluto’s surface,
Alice, which  measured the height of Pluto’s atmosphere using ultraviolet  light,
REX, which looked for radio waves beamed through Pluto’s atmosphere by radio dishes on Earth and  found evidence that Pluto’s atmosphere is collapsing,
PEPSII, which found Pluto’s escaping nitrogen atmosphere,
SWAP, which found the tail of particles escaping Pluto,
and SDC, the student dust counter, the first student built instrument on a NASA interplanetary space probe.
In addition, the set includes the minifigures of Clyde Tombaugh and Alice Bowman. Clyde Tombaugh built his own telescopes as he grew up on a farm in Kansas. His drawings of Mars and Jupiter impressed the astronomers at Lowell observatory enough that they hired him to search for a ninth planet on their new 13 inch telescope. Just over 1 year later, on February 18th, 1930,  he discovered Pluto by “blinking” two photographic plates taken on different dates.
Alice Bowman is the mission operation manager, or MOM, of the New Horizons mission. She oversaw the team of engineers and scientists who built, launched and operated New Horizon on its historic mission.
If you think this would make a cool Lego set, please support us!