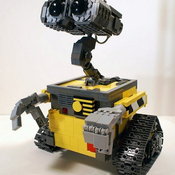 These are my owls.

I started the first owl on a lazy summer's morning. I used small radar dishes and 1x1 flat circular pieces to make conical eyes. After a few minutes of fiddling with the eyes and some other pieces I decided to make an owl. Once I had built the brown owl, who eventually became the mother owl, I was encouraged to build another. I created the grey owl next. This owl became the father of the family. I built the two youngsters in the following weeks and I pronounced them brothers in crime. My brother took some photographs to use on Lego Ideas.

The main features of my owls are their conical eyes, poseable wings and a ruffled feathers effect. Each of the owls have distinguishing color features. For instance, the grey father owl has a touch of blue on the top of his head.

After deliberating, I decided to give them names: Silver Beak, Blue Feather, Grey Tail and Scruff.

Please support this project and tell your friends about it!