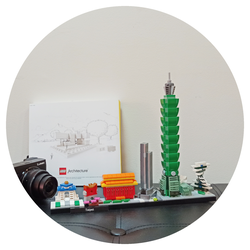 Dear Architects, Designers, Travelers, and Fans,
Toronto
Toronto is located in southern Ontario, Canada. This is the economic capital of Canada and one of the most powerful cities in northern America with Chicago, Los Angeles, and New York. Toronto is 630,2 km², and approximately 2.800.000 people live in the city. It is located in the Golden Horseshoe Area which counts about 9.500.000 people. Toronto is established at the edge of Lake Ontario, one of the five main lakes of the Greater Lakes region of Northern America. Toronto is a beautiful city with many modern skyscrapers and many beautiful architectures. It is one of the most cosmopolitan cities in the world and one of the most comfortable city to live in! Toronto has many nicknames such as "the Queen City" because it is the biggest city of Canada or "Hollywood North" which refers to the city’s strong film industry or also "The 416" which refers to the original telephone area code for Toronto.

My latest LEGO model is King Toronto Condos located at 489-539 King Street West in downtown Toronto. It is an amazing project which planning and designing by a young architect, Bjarke Ingles. Also development by Westbank Corp. King Toronto Condos will be a unique project ever been built-in Toronto.

Habitat 2.0 by BIG in Toronto

On his Instagram page, Danish architect Bjarke Ingels even refers to the as-yet-unnamed project as "Habitat 2.0, 50 years after Moshe Safdie, at King Street West, Toronto". In plan, the complex will be a hollow rectangle framing a large communal courtyard for residents. But the building mass will be broken up into cuboidal modules, each twisted by 45 degrees to create more opportunities to bring in daylight. The five tower elements will each be between 15 and 17 stories high. There will also be openings at ground level, allowing pedestrians to potentially walk through the courtyard. Ingels told Canadian newspaper The Globe and Mail that the effect will be akin to "a Mediterranean mountain town". "The scale of the project is so broken down that it almost looks like a bundle of homes rather than a big new building," he said. The unusual layout will create numerous different configurations for residents, and apartments will come in a variety of sizes. But most units will have private terraces, many of which will offer impressive views over the city rooftops. Material choices have not been finalized, but the current plan is to clad the building in some kind of light stone – offering a slight contrast to the raw concrete of Habitat 67.

Moshe Safdie presented his experimental modular housing Habitat 67 at the 1967 World Expo in Montreal as a vision for the future of cities. BIG's cemented its reputation as a housing design pioneer with 8 House, a Copenhagen development featuring a figure-of-eight plan, but also with its earlier Mountain Dwellings. The King Street West project is one of several projects BIG has underway in Canada, alongside the twisted Vancouver House skyscraper and the curvaceous Telus Sky Tower in Calgary.

Measure of King West. St Condos
h= 7.1 in/ 180.34 mm
l= 12 in/ 304.8 mm
w= 8.2 in/ 208.28 mm
I think this idea will be a great Lego Set of approximately 2390 Lego bricks, that many people could enjoy! Toronto Condos is such an amazing project, beautiful building, and it is awesome to build it in Lego bricks! Thank you to all the supporters! Thank you to all the followers!
Please feel free to leave comments or suggestions!
David (VBoiHuynh)
IG: vboihuynh
FB: David Huynh
Youtube: vboi huynh
Blog https://huynharchitecturebricks.blogspot.com/
31
321
days left