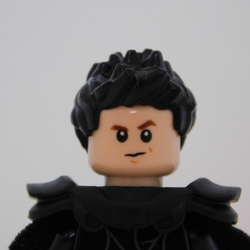 Deep in a land of fire and ash, in the cave of a huge volcano and hidden a great treasure coveted by all and guarded by a dark fire-breathing dragon. Many left to make their fortunes and cover themselves in fame, but none have ever returned.

Description
The set includes:
-a fire-breathing dark dragon with folding wings, measuring approximately 45 centimeters longs and 45 wingspan;
- a valiant knight who has come to fight and enrich himself;
-a display with a volcano surrounded by a lava river. In the volcano there is a treasure hidden in a cave.