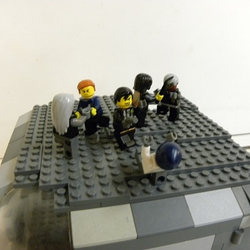 The survivors of the zombie outbreak in Overbrook City have retreated to what they think is an abandoned building. Unfortunately though, the building was infested by several zombies.

The zombie ambush includes a motorcycle, an offroad car, and six minifigures. Three zombies and three survivors. Also to add to the playability, the interior of the building has a rope, and several other cool features. If you wouldn't want this as a zombie infested building, it could be part of your modular city as a crumbling section of town, or a place where you could make fight scenes. The possibilities are endless!