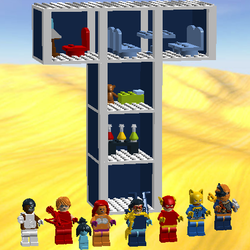 He-Man takes his friend Sagitar back to his home planet Equinos for the Running of the Herd, but Sagitar's arch-enemy Staghorn finds about it and attacks Equinos alongside Skeletor! He-Man and Sagitar must stop the villains and their powerful vehicles, the Terrorclaw and the Doomcopter.

The Terrorclaw can take a tank-like form for transport or a biped form for battle. It has a capture claw on front.

Loosely based on the TV episode "The Running of the Herd" of the New Adventures of He-Man.