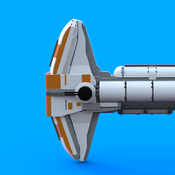 I was looking for something fresh to build.

And just happened that this model piqued my interest when I caught Rogue One in December'16.

The undermanned, under-powered rebellion, yet again pulling off a classic David vs Goliath. A tiny, somewhat insignificant looking vehicle, with its crew sacrificing themselves to take down not one, but two imposing Star Destroyers.

I knew I had to build it.

I did my best to recreate it and was also influenced from the Rebels cartoon that had the same model.

I spent the next few weeks working it out on LDD, through multiple renditions. But what's LEGO if you don't build it =)... so here it is!

It has 3 dual laser cannons upfront, and 1 rear mounted cannon.

6 escape pods ad the bottom, and 4 engines, and of course the tough reinforced HammerHead that rammed and destroyed 2 Imperial Star Destroyers.

I added a stand for a sticker which I'll get printed soon.

I hope you like it as much as I had fun designing and building it.