Escape from The Mummy's Tomb 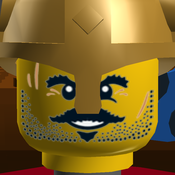 This is a model of Escape from the Mummy's Tomb. Brave adventurers Rick Coleman, Prof. Joseph Burner, and Lyra Frost must find the hidden treasure of the wicked King Ramses and his mummy soldiers. But watch out, the ruins are crawling with poisonous scorpions!

I propose that this would make a great Lego set because it would be a great adventurous set for kids who have a thirst for adventure!