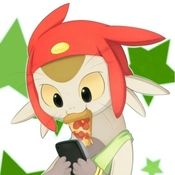 Toa Gali is an iconic reoccurring character from the Bionicle franchise. This model has been made as a posable action figure that is a tribute to her and also the Bionicle universe in general.

The design for this Toa Gali figure is based on her original 2001 look combined with her stylized portrayal in the Bionicle movies and featuring a more nuanced color scheme influenced by her Bionicle Mistika counterpart. The mask and hooks are used in this model approximate their original namesakes in a stylized fashion in part because the original pieces for her figure are not available on Lego Digital Designer.

This Toa Gali figure extensively uses the newer micro ball joints as well as regular ball joints and single degree pivot joints to allow a relatively high amount of poseability for the toy. The figure contains an aforementioned 26 points of articulation which allow it to contort into a myraid of active poses such as swimming, running, fighting, and rock climbing; as on par with the abilities of the original 2001 character. The figure comes with two rock climbing axes based on the pair used by the original 2001 Toa Gali. These can snap into her hands using a connection clip on her palms, which allows the accessories a solid connection to the figure when posing.

The design itself is adaptable to other characters in the Bionicle franchise, mainly the other five Toa Mata from the 2001 Bionicle series.

The model featured on this project page contains 299 pieces, which would put the price of the set around 30-45 USD if it was produced consistent to the existing price trend on official Lego sets.

Thank you for checking out my project!