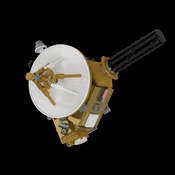 After its famous flyby of Pluto on July 19, 2015, NASA’s New Horizons flew into the press as the first mission to the last planet.  Now will it fly through Lego Ideas and into production?

The first major test of the scientific payload was the Jupiter gravity assist.  As it flew past the gas giant, it observed its major moons.  After using the momentum from Jupiter’s gravitational pull, it shot on its way to Pluto leaving the solar system behind.  As it passed Pluto, the New Horizons probe took the best images of the dwarf planet ever.  All instruments functioned as planned, and minus a small glitch before the approach.  The probe studied the composition, geography, and atmosphere of Pluto and its five moons: Charon, Styx, Nix, Kerberos, and Hydra.  Now, will you help it on its journey to 10,000 supporters?

The model features the full scientific payload, and other features of the craft.  They include:

The model contains 357 pieces, or 330 without the stand.  The model was built on Mecabricks, so a big thank you goes out to the creator of the site.  The renderings were done in Blender.