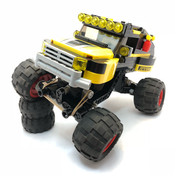 The Baja champions key feature is its suspension. The truck has 2 swing arms and each swing arm is connected to its own shock that gives it suspension. I built this truck to be jumped and that's exactly what I did. After many test runs and design changes I’ve made the truck body with very few pieces making it as strong as possible.

The Baja champion has bumpers front and back that are built into the frame which protects the body by directing impacts into the frame instead of the body. All the force that goes into the bumpers and shocks get directed into the holes on the frame rails and not into where the body is mounted, making the truck even stronger.

The frame design allows various bodies to be put on it, this truck body is built on its own plate making it sturdy even separate from the frame. Since the body is on its own plate, bodies are very easy to switch without breaking or taking anything apart.

The strength of this truck is great for kids because they can play with it and not break it. Also being only roughly 245 peices it isn’t very hard to make. With these qualities I think the Baja Champion would be a great kit for all ages.