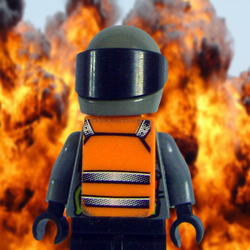 Flying out of the third century BC, the air galleys are the ultimate symbol of pre-Hellenistic aerial supremacy in the ancient world. Leaving terra firma far below, ancient crews once maneuvered these winged ships into the air to contest for each others heavenly dominions.

Part counts are 149, 177, and 166 for bow, wing, and stern segments, respectively. The galleys pictured have upwards of 1023 pieces not including minifigures or deck accoutrements.

See the video for a better view of the ship.