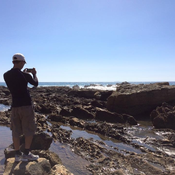 This robot, Boa, is inspired by the video game Walking War Robots. Boa is a heavy weaponry robot. The top weapon is called ECC Thunder, which works like a machine gun. The base that the ECC Thunder rests on is called the E-SG Taran and it works as another set of weaponry. The entire weapon system rotates in 360 degrees. However, due to the lack of parts I was unable to make the legs mobile. Hopefully, with this project this robot could come to life and be able to move its legs and stand on its own. Also, the weapons could be interchangeable just like the game itself. Boa is an inspiration for me and I hope this inspires others to vote so it could come to life.