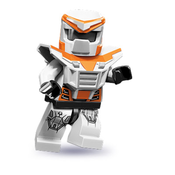 This is my second project and, in my opinion, my best. This is basically a 16 inch retro-style LEGO robot. It has a net launcher on it's arm and a sawblade on the other.  I wanted to make this build as complicated and awesome as possible and worked tirelessly on this model, building, then breaking, then rebuilding,  then making different joints so it would be able to stand upright on its own. It's head can rotate 360 degrees, and so can the waist. Again, I think this is my best project, and I hope you feel the same.