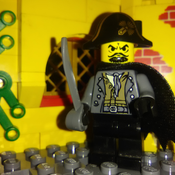 We all know childhood game we used to play by making a fist for Rock, holding our hand flat for Paper, and two fingers for Scissors.

The rules are the same but the actions are different.  There are three levers to choose from, each controling one of the three items of the game.

Push the Rock lever and Rock spins around showing your opponent a small boulder.

Push the Paper Lever and a Newspaper Tile is displayed.

You want to choose Scissors you say? Then push the top lever and the Scissors pop out the side.

There are two player modules making this a two player game; but there is no max limit if you simply add more player modules!  The player modules are constructed with identical parts so neither player can be at an advantage.  I decided to not connect them together since not everyones table (or laps if you choose to hold it) are spaced the same.

I originally constructed this as a simple flip game similar to what was shown in the lego ideas books, with the intention to use it in my LUG's interactive section.  However as my two boys played with it I spent more time reattaching parts than they did playing.  So over the next few months I went through many revisions and eventually decided that I needed to inter-connect everything with Technic parts.

After several more revisions I came to the design you see here.  After my game no longer came to pieces as my boys played (and they were not gentle) I knew it was ready.  The public got to test it out at BrickWorld in 2018 as part of my LUG's interactive game section.  With such good feedback I decided to keep it assembled for future use.

Everyone that plays it seems to love it so I figure why not post it to here.  Maybe you will love it too!

There are roughly 150 parts in each module and since they are identical that brings the total to roughly 300 pieces.  I say roughly as I did not keep track when I originally built it and I may have missed a brick or two when counting the assembled model.

The 6 1x4 white tiles I have covered in Tape to write Rock, Paper, and Scissors labels.