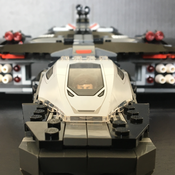 By WonderfullSpaceShipDesign
21 comments
In the year 2044, the world has been exposed to the Alien race of Ragonarka, a race bent on destroying all humans. Space Force has tasked with finding the Aliens and exacting revenge on the Aliens for the battle of Morbar. The Piper Class A2230-77 fighter, commonly called PC7's are on the front lines. Used by Alien Hunters, this specific one is maned by Andre Smith, expert bounty hunter, martial artist, and ace piolet. Nicknamed the Sting Ray, this trusty ship promises to take a beating, and still bring him back to base. Equipped with laser cannons and missile launchers, this is sure to instill fear into the Aliens who may cross its path.
Features include:
1. Spring Loaded missiles 2x
2. Stud Shooters 2x
3. Opening cockpit and storage area
4. Maneuvering Fin
5. Adjustable Wings
I built this because I love to build Spaceships, big, small, fast, slow, and all kinds. I was inspired to build this after watching Star Wars and seeing all of these super cool ships, and I was like, "I want to build something cool." So I did. The pieces just seemed to fit together in a way that made sense. And it was so cool. I want to make the people who build it have that satisfaction of accomplishing something, just like I did.
This would make a great set because it has a lot of features, and has tons of room for addons and whatever people want to add to it. It is also really cool looking and makes you get the sense that its from the future.