Guardians of the Galaxy Milano 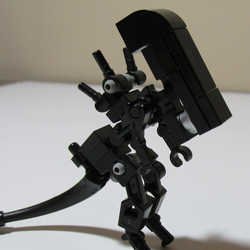 When I saw Guardians of the Galaxy for the first time, I thought Star-Lord's Milano was one of the most creative and vibrant space ships I have ever seen, so I decided to make my own Lego version with a complete interior.  Since this is my first attempt, as well as my limited range of pieces and colors, there are many inaccuracies to the movie that are noticeable but I made sure that it was as sturdy as possible.

The model's two deck interior is highly detailed which capture's the ships messy techno environment (though I was unable to make it look like a Jackson Pollock painting) and increasing the playability beyond that of a standard model. If you want the complex look comparable to the Ultimate Collector's Millennium Falcon with the playability of the Medieval Market Village, please support my project, the Nova empire needs you!

I also intend to update the model from time to time, such updates I intend to have are light and sound attachments, and of course filling in some gaps from the film.