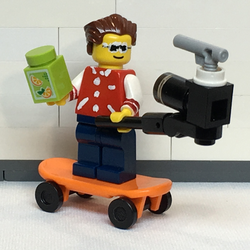 This is a 1:18 size LEGO model of the iconic "Big Red" Lighthouse in Holland, Michigan, USA. Some of the photos in this submission show the real Big Red in the background with my LEGO lighthouse in the foreground.

The inspiration for this project began with my interest in lighthouses, particularly this one due to its vibrant red color and location along the Eastern coastline of Lake Michigan. It is one of the most easily recognizeable lighthouses to people like me who live in the region.

There are over 18,000 unique lighthouses in our world. Due to their locations, operating conditions, design features and colors, these structures take on personalities of their own. Each lighthouse has a fascinating history. Imagine what lighthouses witness: spectacular squalls, hurricanes, ice, snow, beautiful sunrises and sunsets, heroic rescues and shipwrecks.

My idea is to build iconic lighthouses with LEGO. I have always been attracted to nautical LEGO themes. Many LEGO sets feature ships, boats, beach scenes and marinas. There are a small number of official lighthouse sets, however, there is great opportunity to build truly eyecatching LEGO structures that have very personal meaning to people. The LEGO lighthouse series could be an extension of LEGO Architecture or stand as its own theme. Lighthouses may not attract as many visitors as the famous buildings featured in LEGO Architecture. However, lighthouses often elicit similar responses. Photos of lighthouses are often seen hanging in homes, boats and restaurants. They are featured on magazine covers, in family portraits, selfies, movies, tourist guides and in the hearts of people who live near them.

Lighthouses could be built at any scale with LEGO. This one is made with over 2,300 Lego pieces and is fully freestanding with no glue. Weighing 9 lbs, it is roughly 21'' high with a 19'' x 9'' base. It does not open up in any way, although you can see through all the windows.

Thank you for considering my submission.