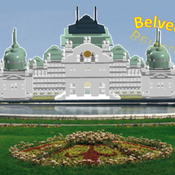 The Belvedere is a historic building complex in Vienna, Austria. It consists of two Baroque palaces, the Upper and Lower Belvedere, the Orangery and the Palace Stables. The Belvedere was built during a period of extensive construction in Vienna, which at the time was both the imperial capital and home to the ruling Hasburg dynasty.

It houses the Belvedere museum where today is guarded the Kiss. It was painted by the Austrian painter Gustav Klimt. The canvas depicts a couple embracing, their bodies entwined in elaborate robes decorated in a style influenced by both linear constructs of the contemporary art nouveau style and the organic forms of the earlier arts and crafts movement.

I decide to realize this project because I think that even if the Belvedere is not as know as White House or Eiffel Tower, it is one of the most majestic construction of Europe. Inside there is one of the most famous masterpiece of Klimt. I wanted to represent it not as a painting, but like a sculpture because I think it is the best way to show the real idea of the artist. He wanted to show the fusion of a man and a woman in a unique corps.

I hope you will like my project. My idea is to let everybody know about this great monument and the richest it contains within it.

Give one vote and you will soon have a little Belvedere in your room. The model is made from 1762 bicks.