Story: The world's most elite spy agency, Femme Force, recently lost an agent when Nell Molokov, weapons expert, went rogue. Forming her own gang, and creating a super-army of Toxic Soldiers, Molokov is on a rampage across Europe to steal the 6 Crowns of Sapphire.
Can the Femme Force stop them in time, or will Nell Molokov collect all the crowns for her world-ending machine, the Apocalyptron?! 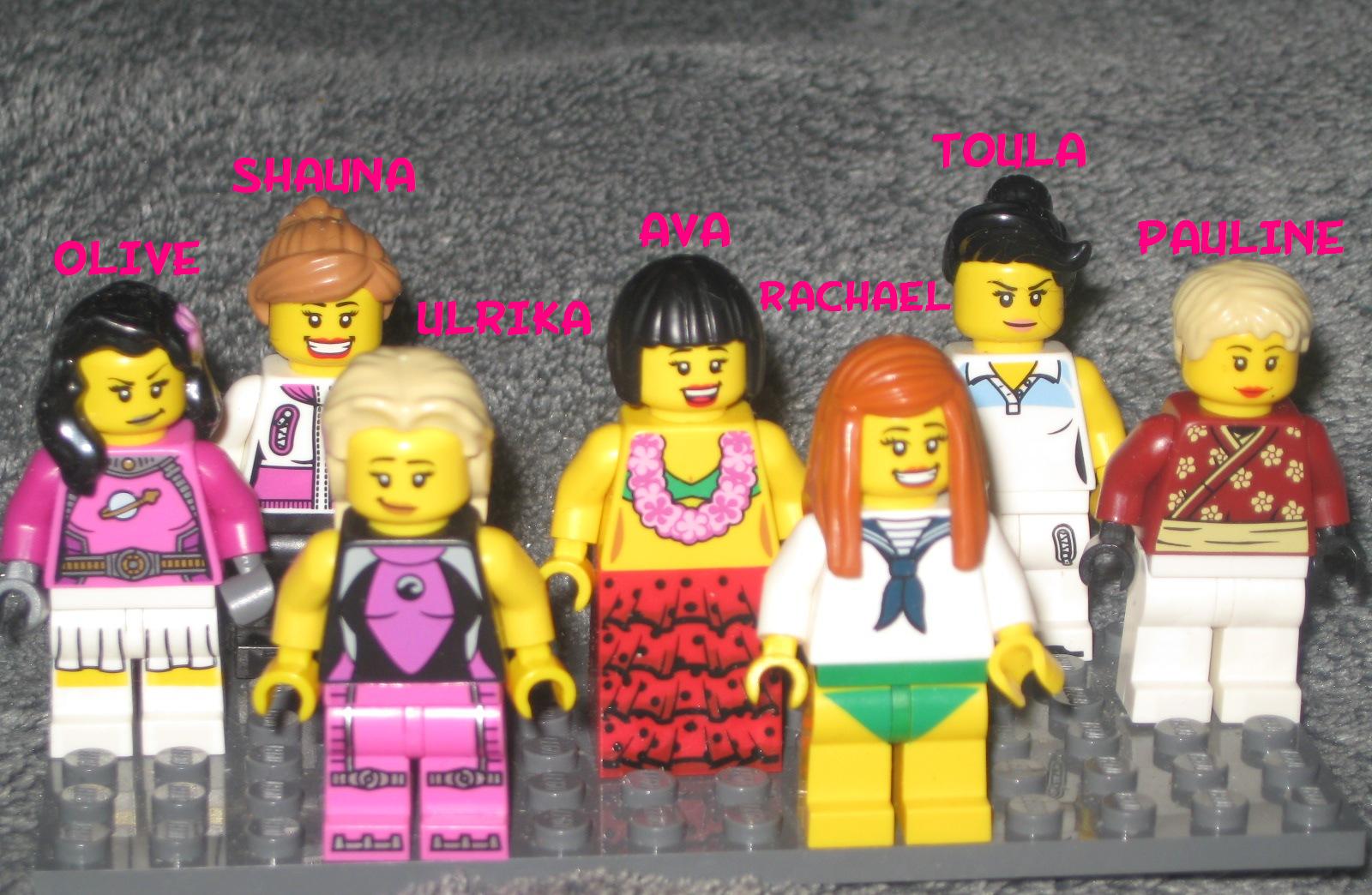 THE MARINAS:
Ava Marina; Motherhen and leader of the Femme Force, her mother started the agency in the early 60s and Ava inherited it in her 30s. She spends her days in her office which contains a bowling alley and swimming pool. She has one real arm, after losing the left one in a freak criminal accident.
Olive Marina; Ava's daughter and current Weapons Expert. Formerly Tech. Olive is too young for field work but her intelligence levels make her the world's best Weapons Expert. She spends her days in her anonymous van, which is decked out with spy gadgets, computers and weaponry. Her boyfriend, Steve, is her driver.

FIELD SPIES:
Shauna; The spy team's latest recruit, and youngest. Nicknamed 'Rookie', Shauna joined the team on her 25th birthday and drives a red convertible, with hidden spy gadgets, and voice command. Highly trained, Shauna was recruited straight out of the US Marines.
Pauline; The oldest of the field-spies, "Paulie" is the most experienced, having taken part in some of the most dangerous missions in the agency's history. She is a former body builder and now keeps up with the gym daily. She gained her pilots licence on her 21st birthday and now flies in her own voice-activated jet, invented by Nell Molokov.
Rachael; The 'Party Girl' of the team, her relaxed nature drives Ava crazy, but at the end of the day, her talents in blending in ensure Rachael can complete some very tricky missions. She's also an olympic gold medallist in gymnastics which makes her talented at escaping from tight situations. Her vehicle of choice is her own personal submarine, which turns into an everyday fishing boat for stealth missions.
Toula; Hard-nosed Toula spent her youth on the streets, she's tough, uncompromising, but deep down thebest friend you'd want in a dangerous situation. Adept at climbing, it's her martial arts skills that earn her a spot on the team. She rides her motorcycle quicker than the eye can see, and enjoys the solo time on the road.
Ulrika; Long, blonde Ulrika is a total bombshell. She's able to win men over by flicking her hair over her shoulder, and knock them flat by whipping her hair around. Strong, smart, agile, Ulrika is more than meets the eye, which is a lot! She spends her days learning languages, and has now learned 12. Before Molokov betrayed the agency, one of her last inventions was a solar powered glider, which is now Ulrika's method of transportation.

VILLAINS:
Nell Molokov; Fiery and short tempered, Nell was a huge part of the Femme Force's success in the 80s through until her attraction towards the dark side. She used her position to sabotage many FF missions, resulting in the loss or injury of many field agents. On a blustery, autumn day, beneath a skeletal tree, Molokov was confronted by Ava Marina about her dastardly deeds. Angered by being caught, Nell responded with force which resulted in Ava losing her arm when the tree fell on her. Ironically, it was Nell's final FF invention, a prosthetic arm, that Ava now wears.
Nils Franklin; Nell's Right-hand-man and body guard. He fell in love with Nell but has not yet been able to win her affections. He is slightly geeky, but knows his way out of a sticky situation.
Pip; A short, volatile criminal with a history of diamond-theft. He joined Nell before she left the Femme Force. He is often the mockery of the Toxic Soldiers and Hoodlums for his short stature, but makes up for it in might.
Razorback Ray; A tough hoodlum in a pin-stripe suit, his great-great grandfather was the infamous gangster Johnny No-Legs. Razorback grew up admiring Johnny and hopes to follow in his footsteps.
Brickfist Bill; Not the brightest crayon in the box, Brickfist is Nell's son, much to her dismay. He tries hard to make her proud but always causes accidents and failure. Crime life aside, she really does love her son, he just doesn't know it.
Toxic Soldiers; Soldiers stolen from the world's armies, brainwashed and modified in Molokov's lab. Now their skin contains a toxic poison which makes it impossible for the Femme Force to touch them. Of all different colours and races, the Toxic Super-Army is Molokov's greatest weapon.... so far. 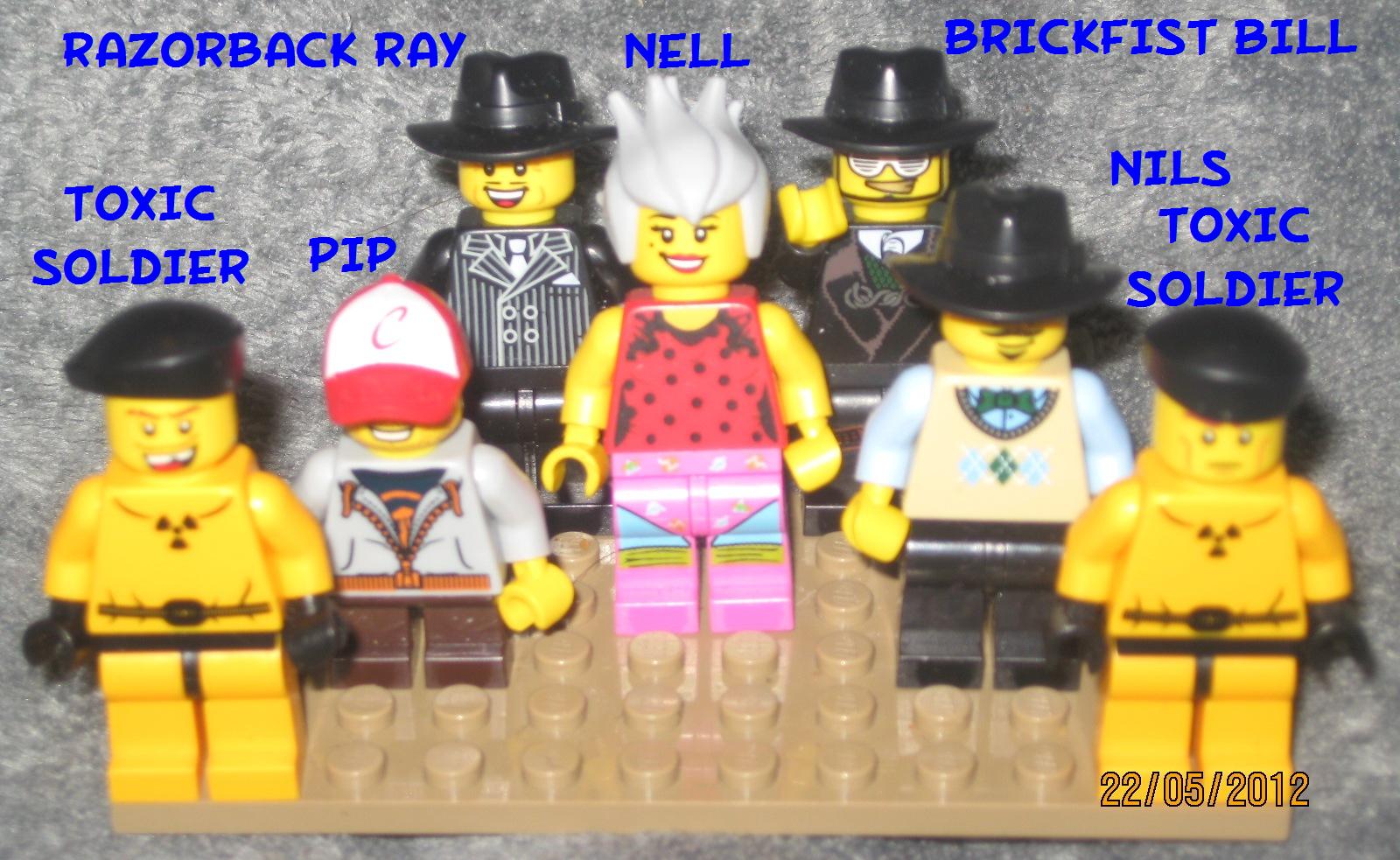 Set design ideas- photos to come:
Femme Force Headquarters: Secret Spy Lab with a strong 60s vibe.
Shauna's Spy Ride; Slick convertible car with hidden spy gadgetry.
Paulie's Jet Raider; A slim jet plane used for missions with Pauline as the pilot. It's "brain" is a voice-activated super computer which allows it fly, and land, safely without Paulie at the helm.
Rachael's Deep Sea Hybrid; Is it a submarine? Is it a fishing boat? Whatever the mission needs it to be!
Toula's Speed Cycle; Daredevil Toula gets around on her slick ride, complete with built in computer for times when the talented spy needs to make a quick exit. It always returns back to her at the Femme Force HQ.
Ulrika's Glider Ambush; Small set with 1 MF, an exclusive "flying Ulrika" outfit.
FF Headquarters Costume Room; With extra selections of clothing, and hairpieces. As well as a small selection of extra coloured hands. This could be a medium, almost booster-like set and retail at around $50 with the right amount of clothing options. Designs should be of varying occupations and cocktail dresses.
Costume-Booster Lego-Classic Pack; A pack of 6 extra costumes, and hairpieces based on classic Lego sets from the pre-2000 years.
Molokov's Dark, Dank Lair; A large set with 7 MF's. The Evil HQ is envisioned as very black with florescent colours puncturing the dark. As Molokov is a scientist, there should be a strong element of experimentation, including an animal or two in cages, and a human brain piece in a jar. This would be the only set which contains all the main villains, as well as two Toxic Soldiers. and could also contain a skeleton chained to a wall.
Spanish Crown Acquisition; Pictured below, this small set features Pauline protecting the king and queen of Spain from Molokov's cronies. Brickfist Bill has arrived with a grapple gun and is keen to steal the crown. 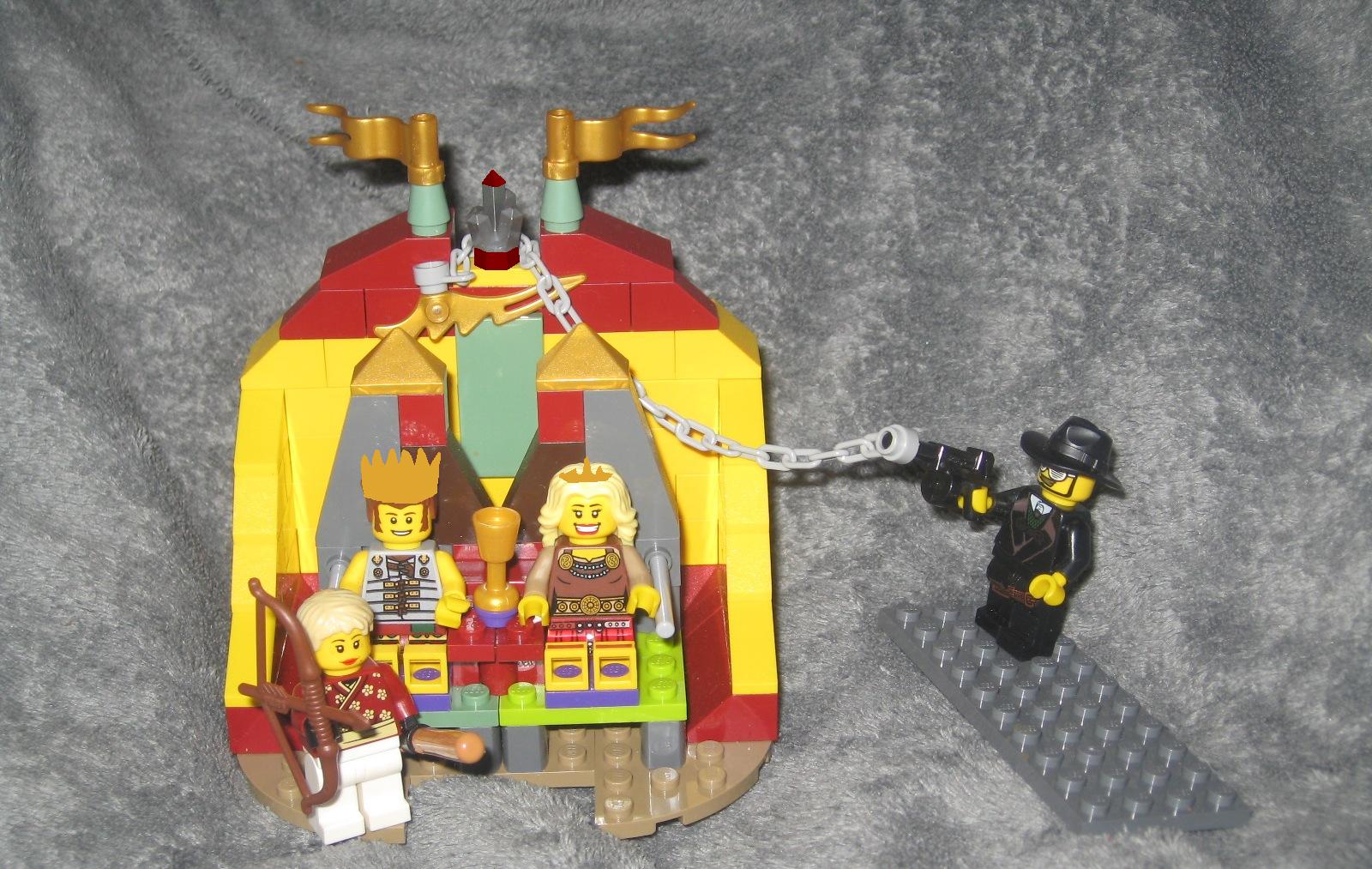 This will also allow for more female Minifigures as LEGO is severely lacking in girl power.