Cosmos: Ship of the Imagination 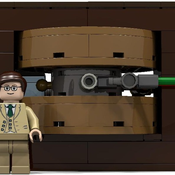 The re-imagined Ship of the Imagination has a sleek new design in order to differ from Sagan’s dandelion ship. In order to commemorate this great event of both television and science, I would like to present the LEGO Ship of the Imagination.The set comes complete with a minfigure of Neil deGrasse Tyson.There is also a possibility for the commemorative set to include a minfigure of Carl Sagan as well.

The Ship of the Imagination comes complete with a sleek, silver body and a rotating interior so Dr. Tyson can travel vertically or horizontally. (Note: color is gray in rendering but is actually silver.)

Because this is the Ship rendered into bricks, it can compatible with virtually any other set; It has the capability to travel to any time or place. No matter where you are going, the city or deep space, the Ship of Imagination will take you there!