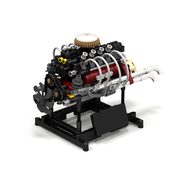 I hereby present an 8 cylinder engine with moving valves!

The idea behind this model was to build a visually interesting engine in a relatively compact package, while still having moving parts. The pistons, valves and fan move and are driven by one Large Motor that is built underneath the cylinder block. It's disguised as the oil tank and also serves as a structural element.
I believe this could be an interesting display model, as well as something that could be included in bigger MOCs. Furthermore, engines have always been a part of Lego Technic models, so why not create a standalone set?

Total part count is 512 including the stand.

The prototype features the exact same mechanicals, although the front construction is simplified as I didn't have the necessary pieces to build it. Also keep in mind that the shutter speed of the camera makes the movement of the valves and the fan look weird at times.

-The model has quite some mounting points so it could easily be installed in bigger MOC Lego Technic  models.
-To gain access to the crankshaft one simply needs to remove the orange pieces at the top of the  engine. By doing this one can remove the air filter, then proceed to remove the top valves, which is one  piece for each side.
-The axle connected to the electric motor can easily be replaced by a longer one. The drive gears can  also be replaced to up or lower the RPM.
-The electric cable conveniently sticks out to the right side and doesn't get in the way during operation.

-The model is attached to rubber dampeners which help to absorb the vibrations at high RPM. This  keeps the stand from moving around on flat, smooth surfaces.

-The valves are attached in such a way that they are unable to ever detach from the engine while  running.

-Extensive testing has been done to ensure that everything works properly.

*If installed in a model, this is the power the electric motor would deliver to whatever it's attached to.

This model is not an accurate representation of any existing engines. To keep the model compact I decided to go for functionality instead of 100% realism. The valves' only purpose is to add an interesting visual effect.