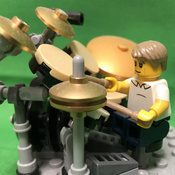 By Hagen Bossie
59 comments
Indiana Jones and the Raiders of the Lost Ark is a film released back in 1981 by director Steven Spielberg. 2021 marks the film’s 40th anniversary and I felt I should celebrate through the creation of a Lego model based around this film.
My Lego model depicts the opening scene of the film, showing Dr Indiana Jones hacking his way through the South American jungle, in search of a Golden fertility idol, hidden away in a booby-trapped temple. This model features 2 scenes that connect together via technic pins.
The first of these scenes is the pressure plated floor, featuring working pressure plates, represented by the Dark Tan plates, that shoot arrows based on the corresponding plate that is pressed down. Once our hero clears the pressure plated floor by stepping on the correct tiles, he is free to claim his prize. Passing through the stone archway leads to the second scene of the set, the room containing the Golden Idol (Represented by C-3PO’s golden head, as I do not own the idol piece). This idol piece can be raised and lowered through the use of the handle on the front of the model, next to the hidden away skeleton beneath the rocks. This idol piece can be switched out with the included sandbag, then lowered, forcing our two characters back down the treacherous path they had just come from in order to escape the temple as it falls apart around them.
A few details that are seen around the set are the small pile of sand, placed by the Golden Idol’s stand. Many vines and other green plant like elements are placed around the set in different locations to give the feel of an overgrown, unexplored temple. 3 Spiders are included, 2 Spiders lining the walls, as well as a spider in the web located in the door way leading towards the Pressure Plated floor room. Much to Indiana’s disapproval, a snake is escaping through a gap in the rocks behind him also. Many other details are featured around the set to discover as the build is unpacked more and more.
This set contains 2 minifigures, plus a bonus skeletonised explorer, trapped away in the rock work beneath the set, holding a red ruby gem and sporting a tan explorers hat. Indiana Jones sports his signature brown fedora, satchel, whip, as well as the sand bag used to switch out for the idol in the film. Satipo is included in the set as well, but no accessories are included for him in the set.
With the films 40th anniversary this year, I believe this would be as good a time as any to rerelease the theme with the opening scene of the entire franchise, where we are first introduced to our cunning, fedora wearing hero that has changed films forever. This set can be enjoyed by young and old fans alike, featuring a display piece that can placed on a shelf for older fans of the films, as well as having play features for younger fans to engage with and enjoy.
As a fan of the film series and the character, building and designing this set was an absolute pleasure to me. Any support for the set would be well appreciated and here’s to getting to 10,000 supporters!
Thanks!