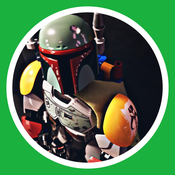 By The_Bricked_Cave1
24 comments
Hey everybody,
As a father, I'm listening to a lot of audiobooks for children. Some of the most popular books at home are the stories of Ritter Rost. That's why I designed a small set of the eponymous character. I hope you like it.
But what or who is Ritter Rost?
Ritter Rost is a German name and means Rusty Knight or Knight Rust. He is a figure whose head is reminiscent of the shape of a car and whose body is reminiscent of a cash register. The knight believes he is the bravest and most handsome man in the entire kingdom. But in the comic books it often turns out to be quite the opposite. Most of the time Rosty, as his friends call him, hides scared with his teddy bear or tries to avoid the housework. In the adventures he goes on, his companions often have to bail him out.
Details:
Additionally, I added minifigures of the two creators Jörg Hilbert and Felix Janosa
I hope you like it and I hope to get your vote :)