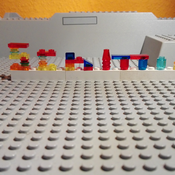 At the pictures you can see my Marussia B2 MOC, it is 16 studs long, 7 studs wide and I built a rallye version too. The rallye version have more stickers. The set includes a pitstop garage (the inside of the garage) too. The garage includes a toolbox and a computer. The two minifigures are one driver (red) and one mechanic (blue).