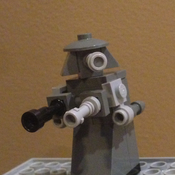 By The Cult Of Skaro
12 comments

This is a model of a NASA space shuttle. These were used to transport parts to the ISS and other space stations. They could also be used to perform different scientific experiments in microgravity. Their design allowed them to land without engines when re-entering the atmosphere and resist high temperatures.

I think this would be a good Lego set as it portrays a popular spaceship design. It is also relatively accurate a real shuttle. This is illustrated in its cockpit and payload bay. The set also comes with a Canadarm (used to hold things in space), a module to be transported to a space station, and a pilot and mission specialist minifig.

By The Cult Of Skaro
12 comments