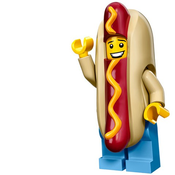 By Hotdog Productions
55 comments
Crime Busters (Italian: I due superpiedi quasi piatti / German: Zwei außer Rand und Band) is a 1977 Italian comedy film directed by Enzo Barboni, starring the iconic duo Bud Spencer & Terence Hill as Wilbur Walsh and Matt Kirby.
Wilbur, serious and wary, and Matt, ironic and jokey, are in Miami, living day by day trying to keep the wolf from the door; since they're not able to find a job, Matt persuades Wilbur to rob the administrative offices of a supermarket on payday, but they take the wrong door and find themselves in the local police station, where they're forced to enlist to avoid being arrested as burglars...
This project reproduces Wilbur Walsh and Matt Kirby in their iconic dresses and uniforms, their police car (with or without the doors), their two black motorcycles and the three-wheeled white one used by Wilbur in the exhilarating ice cream/paintbrush scene.
I hope you like it!