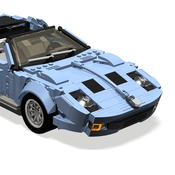 The prototype of this project, Ford Model T was not the first car ever built, neither it was the most powerful, fast, beautiful and so on... It was revolutionary because of its availability, making the concept of automobile the one we know today - a vehicle, more or less affordable for highest amount of people possible, not a luxury for the chosen ones. That is why I have chosen Tin Lizzie - it's simply iconic.

About the model (more info in the last attached image)

Since there is a plenty of  variations of Model T, I ended up making the collective image of it without sticking to any exact modificaton, but trying to follow the last, 1927 version of it - wheels' choice was probably the hardest part because of the original, since there aren't any tires that narrow. However, the overall look of Lizzie is still recognizable.

Being a huge fan of vehicles myself, I grab every new set of Creator Expert car as soon as it's possible - but one day I just decided to try my skills in making my own model, that's how this project has been born. Adjusted to scale of already existing vehicles, this set could be a nice addition to the collection and a good gift for other many cars' enthusiasts.

Since I'm planning to develop the project, the updates will be coming without any doubt - the final target is to manage to improve the model as much as possible and to build a real version of it, so stay tuned :)

Thanks in advance to every single supporter and everyone who stopped to look at this project!