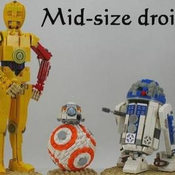 To celebrate the new Star Wars movie, this project proposes the three most famous droids of the saga namely C-3PO, R2-D2 and the recent BB-8.

All three droids feature all details that can be included at the mid-size scale. The mid-size corresponds to an intermediate scale between the ultimate collector series and the minifigure one. The scale allows to get detailled models not too large, not requiring too much parts and not too expensive to produce.

R2-D2 is build using 466 parts and is 15.5 cm high. It is a basic astromech droid having a relatively simple shape. The cylindric body consists in ten panels displaying most of the details of the original droid.
Two panels can be changed allowing the lateral utility arms to extend out of the body. The half-sphere head is build like a small Lowell sphere having five sections in order to get the most accurate possible shape. The head rotates freely on top of the body.

C-3PO is build using 562 parts and is 29 cm high. It is a humanoid droid and is consequently the most difficult to build at this scale mainly the head. The body is very well proportionate and the character is immediately recognizable. The model is fully articulated and can adopt various attitudes. The shoulder can fully rotate allowing it to move up it arms. Most lego parts being common, full yellow (with a red arm) or full grey versions can easily be built. According to the original movie, the right leg can be build grey and according to preview images of the new movie, its left arm can be made red.

BB-8 is build using 257 parts and is 12 cm high. The main body is a small sphere where round plates correspond to the orange and grey patterns. The small head is build on a large round plate using several slopes and round plates with rounded bottom (one with headlight pattern for the main "eye"). It size fits perfectly with R2-D2 and C-3PO and I particularly like to see the three droids together.

The three droids require less than 1300 parts so that it should not be too much expensive to produce.

May the force be with you to support this project.