By MechDuck7
9 comments
A love of dragons, Minecraft....a desire to build big and FIVE days of construction all flow together to birth the Ultimate Collector's Ender Dragon!! The TRUE QUEEN of THE END has graced us with her presence!! I can safely say ALL my black blocks have been used up along with the majority of my black plates. Beautiful, sturdy, somewhat poseable with opening jaw, rotating wings (even though the joints I used are kinda weak) and waving tail. 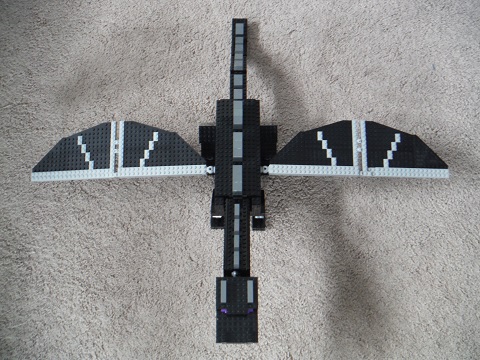 Birds eye! Although I doubt any birds would stick around long enough..... 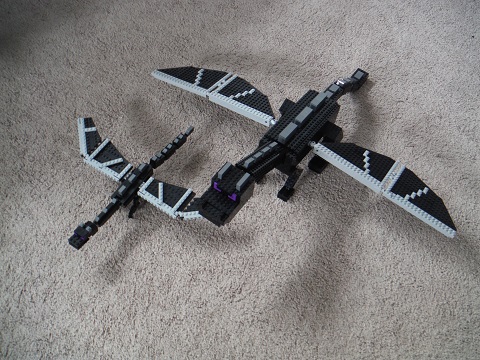 Cruising nicely alongside my "Large-Scale Ender Dragon" title's a bit redundant now, don't you think? At least he has his Mother now. Now from a set standpoint, she could include 2 or three Endermen, an armoured Steve along with a licensed display plaque just as all the other Ultimate Collector's sets come with. Not you might already know that I prefer UCS sets that can double as a display piece and a playable toy and in a sense, my Ender can do just that. She's one of the most solid builds I've ever made, the neck can pivot up and down with little to no fear of slipping suddenly, the head can rotate 360 degrees (even though she'd look stupid with her face on upside down). Wings can swing nearly 180 degrees back and forth and are bendable in the middle just as in the game. The legs however, had to be locked in place to ensure she can support her immense weight. 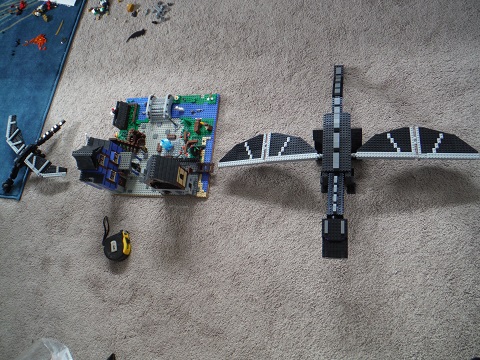 The Ender Mother takes her infant out for his first flight, hovering dangerously close to the helpless village, it's only defense.....it's not from Minecraft. :) 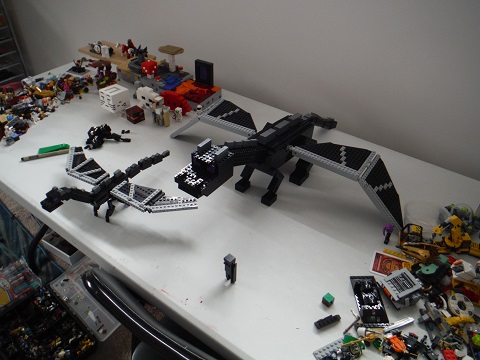 resting peacefully on my " Crafting Table" along with other past builds.