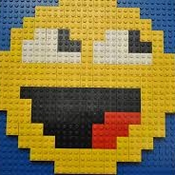 This LEGO Car Carrier set consists of three cars, a LEGO character, and a truck and trailer that is capable of holding up to four cars. The trailer has two levels, and when there is no cars on the bottom level, the trailer's top level can be folded down to create a flatbed, which is capable of holding two cars. On the back of the trailer, there is ramps that let cars drive up. When they are not in use, they can be folded up. The roof of the truck can open up on hinges for the LEGO character to get in and out. This set comes with three cars, but could fit another car that is a maximum of five LEGO bricks wide and thirteen LEGO bricks long. These cars can all fit a LEGO character, though one of the cars' roof needs to be taken off to insert the LEGO character. The truck and trailer can be separated.