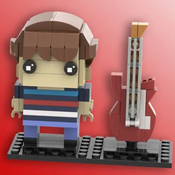 By Fu4eleq
15 comments
The California rockers' look is based on the Life Earth concert in London in 2007.
These are my favorite musicians, I think they deserve a Lego BrickHeadz set like the Spice Girls.
The band was founded in 1983 and during this time has changed quite a few members, but after the return of talented guitarist John Frusciante in 1998, who had previously left the band in 1992, the golden line-up of the group was fixed, consisting of the aforementioned John, bassist Flea, drummer Chad Smith and permanent vocalist ANTHONY KIEDIS!
In 2009, John left the group again to pursue a solo project, but returned in 2019 and on April 1, 2022, The Peppers released their new album "Unlimited Love".
P.s I want to add tattoos stickers or print for Flea, Chad and Anthony