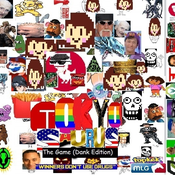 He's a robot that isn't even gold yet the name implies that he's gold because why not. He's also got silver swords not because he thinks it's a good weapon he just wants to challenge and contradict himself so that he may become one of the strongest warriors of all in the land or some more generic RPG adventure dialogue. He started off as Redboy, living in the lands of a barren desert that somehow has a house with all the essential needs to survive. He lived a happy life until quicksand suddenly oozed from the crevasses of his own home. He got sucked in and got mixed in with a gold mine, thus, re-molecularizing his DNA and some, not all, but some of his body parts and limbs turned into pure gold. A few years pass, and Redboy is still fused with the gold mine as in the entire gold mine fused with his body because of high uranium levels beneath the gold mine. He also had a few open cuts from harsh sandstorms as he was moving to his home in the barren desert. Redboy is now 37 years old and is lost beneath the surface but luckily since he was so golden he lit up a secret pathway to the surface (it was pretty much a staircase) and so he went back up to the surface. He notices that his house is still in stable condition and he went in. First he grabbed a snack but he wanted to check the mirror to see if he was alright. He did, and what he saw was an unbelivable sight...HE WAS PURE GOLD!!!!! He also saw that he looked 37 years old and now longs for a purpose while looking cool....