A Tribute to Neil Peart 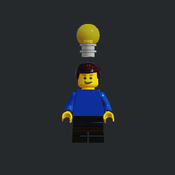 By TheInnovator
16 comments
On January 7th, 2020, beloved Rush drummer Neil (The Professor) Peart passed away to brain cancer. Neil, being an integral part of the progressive rock music Rush created, was considered one of the best drummers of all time. He was one of the most influential musicians, inspiring bands from Dream Theater to Nirvana. Not only was he held in high esteem, but his drumset is one of the coolest and most complicated musical masterpieces ever created. Over the years it has taken on many forms and variations to suit each Rush album. In honor of Neil Peart and Rush, I created a model of one version of his kit, complete with all of the details such as the cymbals, toms, chimes, windchimes, cowbells, and of course, the iconic bass drum. Neil Peart may be gone, but his legacy lives on in anyone who sits down and picks up a pair of drumsticks. Enjoy!