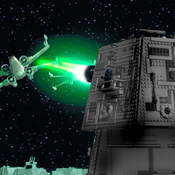 This is my idea for a UCS Lego Star Wars Set of the XX-9 Heavy Turbolaser Tower.

So why did I choose to build this model? There are mainly two reasons:

2.) I think that there is a lack of static models in the UCS – it is all about spaceships, fighters but nobody cares about static objects – so I try to change this with this model.

The design of the model took me about 4 weeks, as I tried to put a lot of detail on the model and to get great visual impression on the model. Especially the angles where a problem in the beginning but after some trying and re-working I got the result that I wanted.

I also tried to give the outer surface a structure by adding different bricks – I did not want that my XX-9 Heavy Turbolaser Tower looks like a big grey block.

Currently I am working on adding an interior to the model, but I guess that this will take some more weeks until it is finished.

The barrels and the base can be rotated so that you can angle the XX-9 Heavy Turbolaser Tower just as you like it best.

You can also download the model LDD file on the Lego Digital Designer homepage.

Please also like my other UCS model of the 74-Z Speeder Bike: https://ideas.lego.com/projects/166185