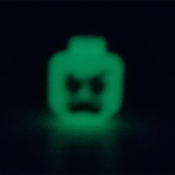 This LEGO model is based off the fantastic BBC comedy show Detectorists which stars Mackenzie crook and Toby Jones as the main slightly eccentric protagonists Andy and Lance, who like to spend their time wandering the English countryside with metal-detectors in search of gold or anything of value hidden under the earth. At the end of the first season Andy and Lance along with the metal-detecting club they belong to (Danebury metal-detecting club) think they have found a site of an Anglo-Saxon burial ground. But alas the do not find the gold they were looking for and return home with nothing. The gold underneath where the two mini-figures are standing represents the Anglo-Saxon burial they never found.

This LEGO creation is designed to be a mini-figure display stand, so you can display it at your office, on your mantelpiece, on a shelf etc. If LEGO were to change anything they should change the head for Andy and his jumper because I have limited pieces I found it hard to find a LEGO head that resembled Mackenzie Crooks likeness, and a jumper that looked like his.

If you liked this LEGO model please vote for it. Thank you for reading!