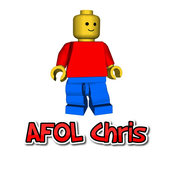 What Is It?
This is a model of Santa's Workshop, it features little elves who are busy making and wrapping the toys ready for Santa to deliver, Santa himself is overseeing the busy elves in the production and wrapping departments and Mrs Claus is on hand with refreshments should they be needed. Also, we can see The Grinch has stolen a sack of presents and is making a hasty retreat.
Why Did I Build It?
I was inspired to build this when I went to a garden centre in 2019 and spotted a non-LEGO model of a Santa's Workshop, and I was instantly charmed by it and inspired to build something similar out of LEGO.
This model was originally built for a collaborative winter village display at a 2021 LUG show.
Why Would It Make A Great LEGO Set?
I have received so much positive feedback about it, so much so that I have been encouraged to submit this as a LEGO Ideas project, so I thought, why not. I think this would make a great LEGO set because it would be a great model for people to build and have on display at Christmastime, maybe it could be part of a bigger Christmas display.
I hope you like it, and if you do, please vote for it.
Thank you and Happy Christmas.