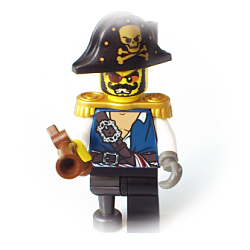 All aboard! Put up the sails and prepare the cannons - it's time to battle pirates! Admiral and his brave Bluecoat Soldiers are chasing Captain Redbeard's ship to rescue Governor's Daughter. They are ready to teach them a lesson with 5 firing cannons. Help Admiral to defeat pirates, lock them up in prison, and finally get some rest in captain's cabin with the bottle of rum.

The idea is associated with 2015 "Pirates" line and came from the fact that there is no ship to face the pirates and it has been already 5 years since releasing "Imperial Flagship".

If you like my project, please support and share the idea so it could gather required support. I would be also grateful for your comments.