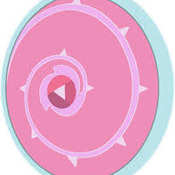 While the Lego Republic fleet is HUGE, the separatists are very underused. I always found Trident Drills to be amazing and I'm surprised that Lego hasn't made a set including it yet.  I decided that I was going to make a set based on the battle for Kamino, and I think it turned out pretty well.

I know Trident Drills only have three legs, but that was difficult to do in LDD, and I think it looks fine with four. The top of the Trident opens up to reveal a small cockpit.

The set also includes a small turret for a clone trooper.