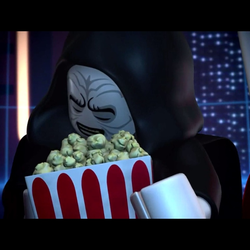 Dr.Ock is about to launch his HX-17 rocket which will cause all people on planet earth to follow his orders, when the E.P.F Agents bust into Dr.Ock's HQ. Will you help Agent Jake Raines sneak into the control room, press the red button and cause the HQ to self destruct. Or will you help Dr.Ock stop Jake Raines and launch his rocket.

Set includes a HX-17 Launch Platform which a detachable HX-17 rocket. Lift of the rockets top to release the gas. Platform also leads to the ocean where the E.P.F Spy Boat can be placed. Platform also leads to the Rocket control room in which there is a chair which turns 360 degrees and a control plate. Other separate objects being two gas tanks, one being on fire, a separate flame and a brown box in which gold is stored. Spy Boat can hold one pilot. On the sides of the Boat is a stick of dynamite and on the other side a saw. Behind the pilot  is a place to store the two blasters. Set includes three Minifigures: Agent Jake Raines with a ultra UV backpack, Agent Sam Glaze former Space Police officer with Jetpack and ultra night vision helmet and Dr.Ock who has eight legs one of them being a laser. The eight legs can face down to from legs or be facing up to hold items. Head of Dr.Ock can lift of in case of an emergency. Both agents come with a blaster each. Sam Glaze has a double sided face.

This Set is a must for every agent fan. Replay an active storyline or create your own story to the Set. Join Agent Jake and Agent Sam on their adventure to stop Dr.Ock and save the World.