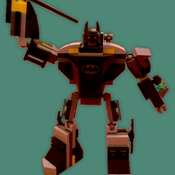 Watch out! Mr. Freeze is attacking Gotham City, and has frozen Robin! Batman must get to the Bat-Mech in order to stop Mr. Freeze! The Bat-Mech has 11 points of articulation, head, shoulders, elbows, hands, thighs, and knees. Attachments include, batarangs that Batman can easily reach and grab from his legs, a lance that attaches to his back, a chainsaw, and EMP gun attachments. The Bat-Mech also includes places that Batman can hold onto, making it appear as if he's climbing up it. The Mr. Freeze ice truck includes flick-fire missiles, and a rotating turret that seats a minifigure. Minifigures and attachments are, Mr. Freeze with freeze gun, Batman with a batarang, an extra angry face, and his EMP gun, Robin with a bo staff, and Freeze Goon with a wrench and a pistol. The price of this set would be about $30 - 35.