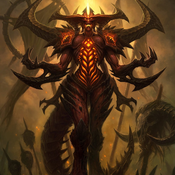 By LordSin
7 comments
In his address, I would like to submit for your inspection a series of figurines of characters from various fantasy collected on the different from regular LEGO figurines based. Almost completely respecting the proportions of ordinary LEGO figures, these are assembled from simple LEGO pieces without the use of specialized parts. Among my characters can be found: Demon harvested in a special manner, with larger parts of the body and tail of different spikes. King beetles, too, represents an example not humanoid pelvic individual, despite the, that his growth not strongly exceeds human, he complex more powerful and squat, to the same he has six limbs, instead four. Undead Archer, Owl jailer and angel are the embodiment of the female version of this character Assembly. This is emphasized by the smoother sides, the inverted details of the cones that are the legs and the smooth plate depicting the female bust. Alien nobleman, in turn, is a male version of the Assembly. broad shoulders and sides, powerful hands with laser blades, can be intimidating. Alien bug-thinker, intelligent top of his form, but having high intelligence, nature has endowed his rather fragile body. This is emphasized by a thinner and smaller body and arms, compared to a large head with green cells with brain fluid. Skeleton sorcerer boasts a variety of magic spells, but also his outfit, dark blue with gold inserts robe covers all his legs, a large headdress and shoulder pads, all speaks of his upstart status. Lava guard is the second version of the male design, more massive and heavy, he easily wielded his fire hammer, knocking enemies on the spot. And the last, but not the worst, is the Alien drone, planning a more rounded shape, it turned out to be more angular for this scale, studying the surfaces of new planets for the presence of useful resources, it is very similar to Sweet Mayhem Systar Starship.
At the end of his treatment I want to say that these figures can become not only fans of fantasy, but also lovers of unusual solutions and minimalism, in my opinion this should be a LEGO, angular and simple in form as in their early days, but these are just my opinion, but what do you think about this?