UPDATE: This is now the fastest-moving Ancient World set that has ever been posted on Cuusoo at any point in time, past or present, and it's accelerating at 360%. If they only make one civ set, this would logically be it! Please click to help speed it up, Thanks! =D

If children get excited about World History, amazing things start to happen. Inevitably, it starts with fighting, and so it's a great way to grab their attention..... but it leads immediately to deeper questions about the march of science, about globalized geopolitics, about the fragility of the environment, and to questions about what our world will be like in the near future. For the children, this is the first step on that journey! 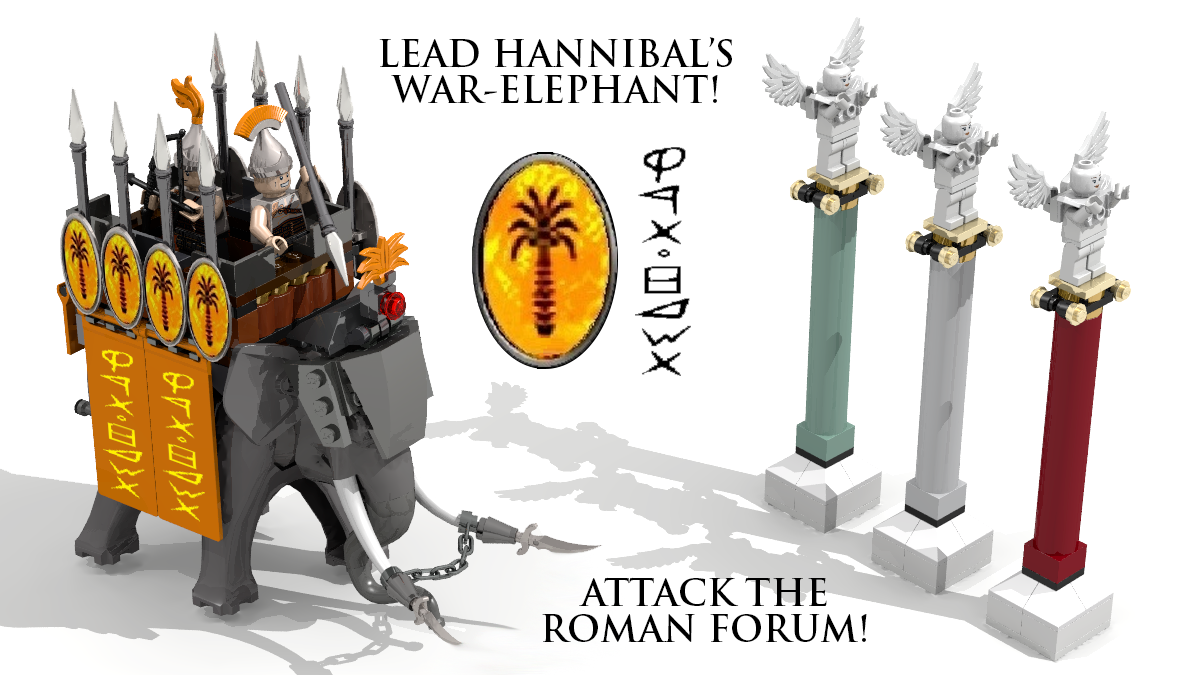 It also opens up all the great "What if?" questions that shape our modern world... What if Hero's steam engine was used for more than just a demonstration model? What if Greek-Fire was used to create new fuels instead of warfare? What if the Greco-Roman Empire had never really fallen, and kept science alive? It opens the door to Ancient-Punk, Da-Vinci-Punk, Steam-Punk, and any Utopian future that Lego can envision! 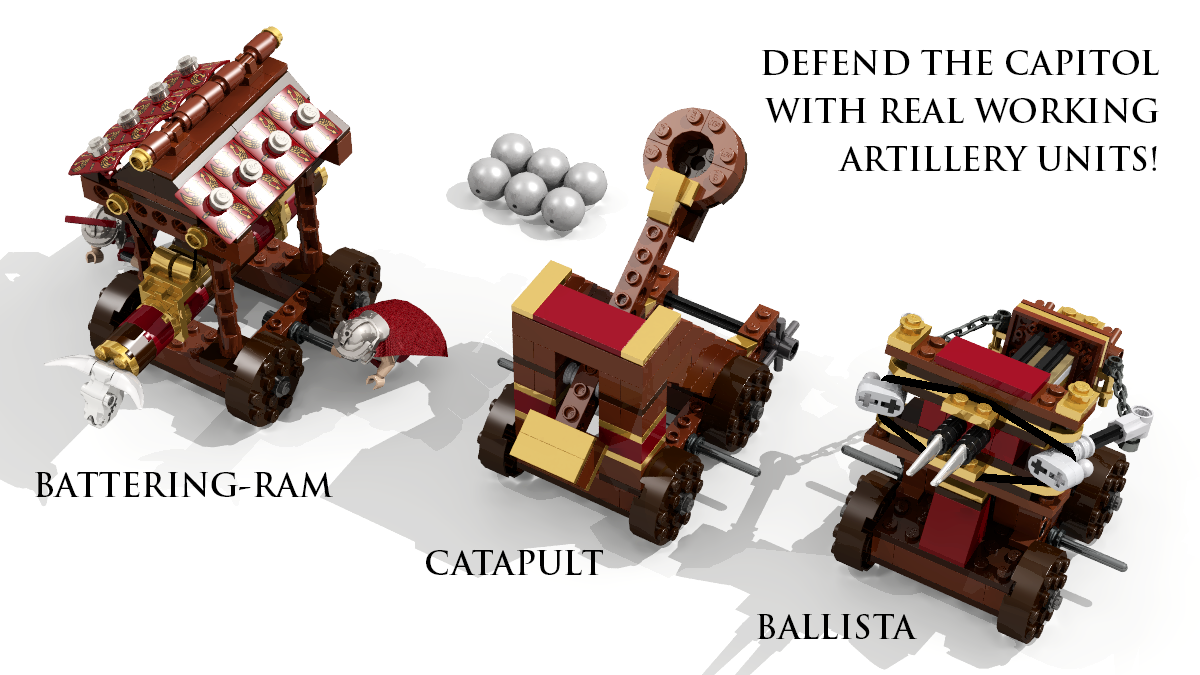 These sets have been in the making for 36 years now. They all draw on the massive input of over a hundred archaeologists, scientists, and historians from six continents, most of whom have 4-to-8-year-olds of their own now, and all of whom are thinking about what kinds of toys they want for their own children. And when they see this, all of them are all asking the exact same question... "Why hasn't Lego done this years ago?!" 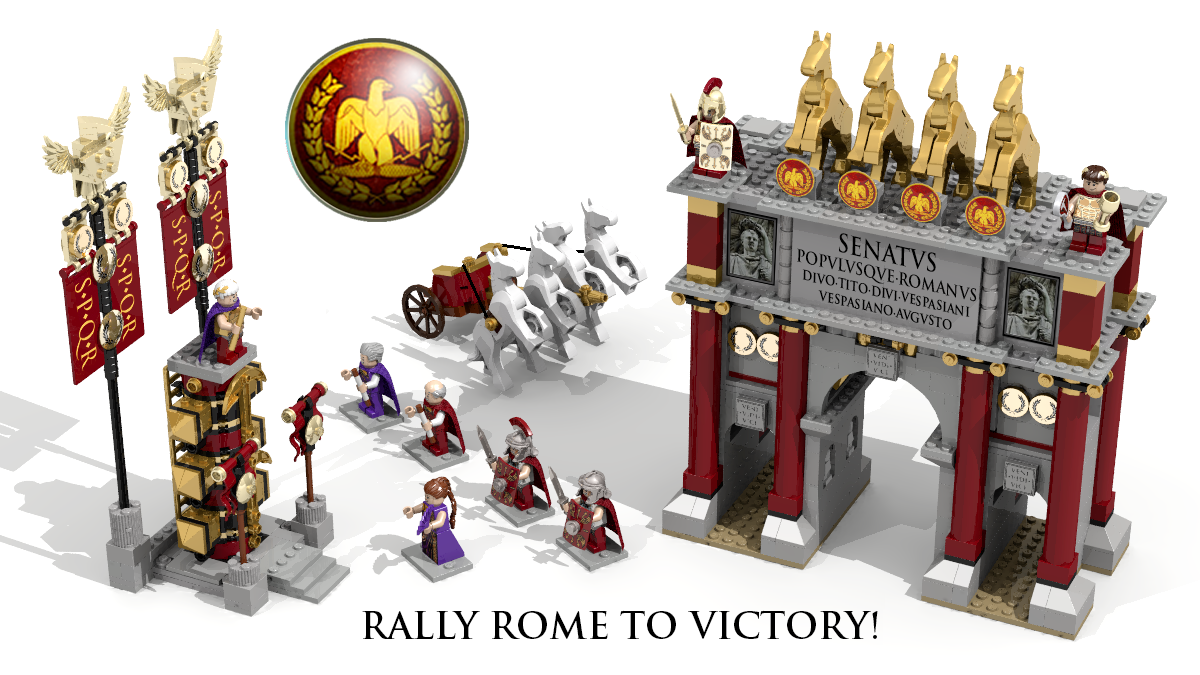 Also come and see the Flickr slideshow of all the hi-res images and concept art with glimpses of all of the movies, shows, and books that inspired the whole series..... I think we all know that Ancient World sets would make a ton of money for Lego, and bring millions of nostalgic fans out of their Dark Ages. Plus you can imagine if any teacher put one of these on their desk at school, the kids would love it immediately! 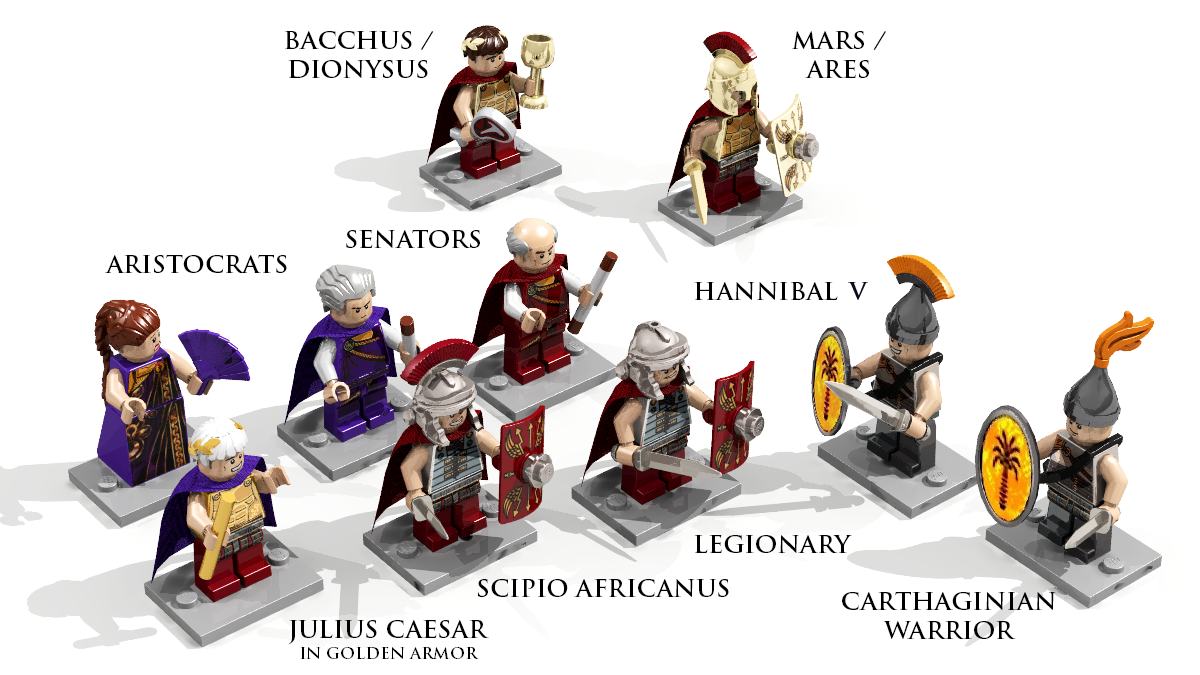 As our story begins, Hannibal V, the Great-Great-Grandson of the conquered strategic genius is headed to Rome, and this time he's looking for payback! He's crossed over the snowy Alps with his massive Carthaginian war-elephant, and he is bent on tearing the city apart! Now Caesar is called upon to defend the capitol at all costs!

The behemoth smashes the Forum... Civilians flee... Alert the troops to halt the rampage!

The Legion needs more artillery... Build a working ballista, a catapult and battering-ram!

Caesar mounts his chariot... He stands atop his Rostra to rally the city and the troops!

It's a Victory for Rome! You get a Forum full of smashable monuments, more soldiers and all new civilians, Hannibal's mighty war-elephant, a working ballista, catapult, and battering-ram, Caesar's four-horse chariot, his authentic Ceremonial Rostra, and the towering Triumphal Arch of the Forum to celebrate the true Power and Glory of Rome!

And Rome is the most popular and fastest-moving set, so be sure to vote your support here first for free by pressing the big green button at the top right of this page. It's totally free to vote for as many sets as you want, since most of the fans are kids!

As soon as you have done that, you are ready to continue your journey onward to Civilizations and Empires, Level 2: The Odyssey Begins...

Beyond that, they could easily branch out into matching sets for other civilizations, including the Aztecs, the Mayans, Africa, India, China and Japan. From there, it could be expanded into the Medieval, Renaissance, Napoleonic, Steampunk, Modern, and Futuristic Eras!

Plus it could inspire them to add more historical details and more fun educational value into Castle, Pirates, and Indiana Jones style Adventurers sets. And if they invest in making a few new prints, they would be able to re-use them for literally centuries and millennia to come!

Will it be as popular as Batman, Harry Potter, Lord of the Rings, Ninjago, Chima, Zelda, MineCraft, Bionicle, Technic, Trains, Classic Space, Star Wars, Superheroes, or Teenage Mutant Ninja Turtles? Only one way to find out... Cast your vote!! Let's do this!! =D

This design gives you 12 extra Roman shields and 8 extra Carthaginian shields, so you can equip a legion of auxiliary troops for Carthage and Rome.

The Roman god Mars was the equivalent of the Greek figure of Ares, the God of War.

Bacchus or Dionysus was the god of celebration and feasting in the Greco-Roman World.

The Carthaginian War-Elephants were highly trained members of the corps. Their presence amongst the troops was no different than war-horses, or modern day trained police dogs in modern day Lego sets. They were actually imported from India along with their Indian trainers, who had a centuries old tradition of preparing them to take the field bravely.

You can easily use just two horses for the chariot, and then you can use the other two to create cavalry units for either side, or as mounts for officers or aristocrats.

Caesar's Rostra is a direct depiction of his exclusive speaking platform, as depicted on real Ancient Roman coins, and on modern Italian postage stamps. He designed it himself to make him look like one of the supernatural beings standing at the tops of columns in the Forum as he addressed the city and the troops.

All of the elements here are designed to fill the Forum of the Old Republic around the time of Caesar. My main I.M.C.T.B. set includes all of the bricks you need to build lots more Greco-Roman buildings, including the Old Forum from the time of the Republic of Rome, or the newer Forum of Trajan from the Age of the Roman Empire, plus tons more!

The Triumphal Arch is a generalized version based equally on the Arch of Septimus Severus in the Forum, the Arch of Titus, and the Arch of Constantine, with various educated guesses at re-creating the look and tone of the ancient pigments. I want the historically accurate vibrant color schemes to be a real eye-grabber and a real selling-point, so feel free to express your opinions. This is a playset version of an Arch, and if Lego wants to do an exact version of a specific Arch, larger or smaller, partially-ruined or fully-restored, in all gleaming white bricks for the Architecture line, they certainly still can, and there will definitely be a niche and a market and a demand for both versions... Plus, the elements shown here also include just about everything that Lego might possibly need to create all kinds of troop expansion sets, with a mixture of traditional brick-building and minifigs, in the future!