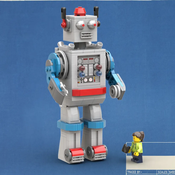 Introducing the ultimate LEGO castle! I have always been a huge fan of the various castle series that Lego has produced and have loved building my own lego castles. This is a design I came up with a few years ago but I recently decided to rebuild it for the purposes of submitting to the ideas group. It is a very large build, however if you review the pictures you will see that the back is wide open for accessibility. This model features multiple rooms and minifigures to allow several storylines for playing with the set. It contains three levels on the main structure and one of the towers can be separated into two pieces.

The bottom of the left tower (when facing the front) includes the following:

The great hall also features a tribute to the history of the lego castle series. Several shields are on display to showcase some of the sets of the past. How many do you recognize?

The second level features the following:

Above the dungeon in the left tower is the Princess's room. She is guarded 24/7 and locked inside.

The right tower (when facing the front) houses the powerful wizard with his potions and crystals. Everyone knows the Wizard has his own tower in the castle, but do they also know he can spy on those in the great hall by swinging the tapesty aside?

The top level includes the following:

This set comes with 9 minifigures:
The King
The Princess
The Wizard
The Blacksmith
The Prisoner
4 Knights

I hope you enjoy all the adventures this set has to offer! I plan to post some updates with additional pictures soon.