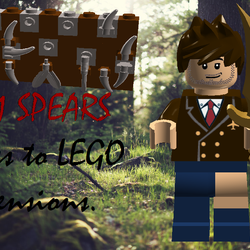 Evil Storbert is out to steal the Grindstone at Roberto's Outpost!

Roberto's Outpost is a Finn Army set I have come up with. Finn Army is an original idea, keep in mind, so plenty of whimsical elements have been thrown in to help stop Herbert Storbert from making off with the magical Grindstone!

Please support this project, it took me a while to make, and I would appreciate all the support I can get to make Finn Army real!