Pictorial Map of The United States 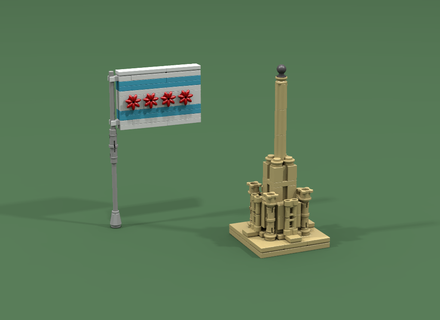 The Chicago Water Tower is one of the most famous landmarks in the City of Chicago.  While its architecture is interesting (and has served as the inspiration for other buildings, most notably the White Castle restaurants), what has made it a historical landmark is the fact that it is one of the few buildings to have survived the Great Chicago Fire of 1871.

The water tower was originally built in 1869 to house a 138-foot tall standpipe what was used to maintain water pressure for firefighting purposes and to help control pressure surges in the area.  Built of limestone blocks, its architectural style can best be described as "castellated", and was very atypical of the surrounding area.  The building was renovated twice in its history, including a replacement of every one of its roughly six million limestone blocks in 1913.

Contrary to popular belief, the water tower was not the only building to have survived the fire, but it was the few public building in the burned area that was not destroyed.  The nearby Chicago Avenue Pumping Station was another.  While the neighbornood of the tower was somewhat industrial when it was built, it now occupies a position of prominence right in the middle of Chicago's "Magnificent Mile", a very high-end shopping district.  Since the fire (at least until very recently), very few buildings in the Chicago area have been built with wooden exteriors.  Almost all buildings, from private homes to large commerical buildings, have been constructed with brick or stone walls.

A few notes on the Flag of the City of Chicago:  The two broad blue stripes on the flag represent the major bodies of water within Chicago.  The top stripe is for Lake Michigan and the North Branch of the Chicago River and the bottom stripe is for the South Branch of the Chicago River and the "Great Canal".  The four stars (which are supposed to have six points) represent significant events or landmarks in Chicago's history -- Fort Dearborn, the Great Chicago Fire, the World's Columbian Exposition of 1893, and the Century of Progress Exposition (1933-1934).

I have now posted high resolution versions of all of the images of this project to my Flickr account.  They can be found by following this link.